The Cordyceps Mushroom supplement comes from an Asian mushroom known as Cordyceps sinesis (C. sinesis) or (Dong Chong Xia Cao, 冬虫夏草) which sprouts from the body of dead caterpillar in the wild. It is also known as the Himalayan Viagra “Yarsa gumba,” which translates as “winter worm, summer grass.

It can only be found in the mountainous regions above 11,000 feet in Tibet, Nepal and Bhutan. Every year the price of the cordyceps increased due to increase in demand. A high value cordycep cost USD$ 10,000- USD$50,000 per Kilo.

The fungus is the result of spores from C. sinensis entering the body of a live caterpillar while it is in the larval form of a large moth native to the region. Upon infection from the spores, strands of filaments called “hyphae” begin to sprout from the spores that then lead to the death of the caterpillar.

The hyphae grow longer and more numerous and develop into a relatively large stalk-like fungal fruiting body that emerges from the insect’s carcass after having sapped the caterpillar’s body of all nutrients.

Cordyceps sinensis has been described as a medicine in old Chinese medical books and Tibetan medicine. It has been used as food, medicine, poison, and in spiritual mushroom practices in religious rituals across the world since at least 5000 BC.

During the Beijing 2008 Olympics, the price of Cordyceps has skyrocketed. Rumour has it that Chinese government were buying up all the Cordyceps for their athletes.

It was found that there were no special training schemes or methods, but after each training session, every athlete would consume a special drink, which contained Cordyceps.

Some of the Health Benefits of Cordyceps?

Traditionally, cordyceps has been used in the elderly population to improve weakness, impotence, and fatigue associated with aging. Improvements in self-reported symptoms have been described, as have increases in red blood cell superoxide dismutase activity and decreases in malondialdehyde levels.

Other antioxidant effects, hydroxyl radical scavenging activity, and decreases in lipid peroxidation are thought to be responsible for the antiaging effects, as well as effects on the adrenergic and dopamine systems. Increases in learning and memory have been shown in experiments.

Finally, the medical center reports that some studies have shown that cordyceps has caused cancer symptoms to improve, in addition to helping patients better tolerate the rigors of chemotherapy.

Cordyceps has long been prized in the Far East as a powerful stimulant that can help boost circulation, tone the liver and kidneys, increase physical stamina and of course, help men maintain a erection. This ability seems to stem from the fungi’s blood vessel dilating properties which leads to better blood flow, especially to the genital areas.A Japanese clinical study has also found that Cordyceps helped 64% of the men who took it for their erectile dysfunction.

Researchers believe that this is due to the presence of deoxyadenosine and corycepic acid in the fungus. Both of these isolated constituents have been shown to help increase libido and desire in both sexes.

Abnormal blood circulation often occurs along with kidney disease. In this condition, cordyceps is a good choice, because it can improve the ability of marrow to produce blood platelets, red blood cells and white cells.

What’s more, the biggest benefit of cordyceps for Chronic Kidney Disease patients is that it can help slow the progress of kidney disease, improve kidney function and reduce kidney damage. Therefore, this herbal medicine is indeed beneficial for most kidney patients.

A number of research studies show that Cordyceps has potential for treating heart disease. It is approved in China to treat arrhythmia.

Cordyceps sinensis flaunts a very diverse lin eup of nutrients that have been seen to have a positive effect to the overall function of the circulatory system.

That’s ’cause cordyceps contains a number of nucleosides like deoxyuridine, thymidine, hypoxanthine and adenosine which play a key role in producing energy and enhancing blood flow.

Sinensis have a stimulatory effect on ion transport in human airway epithelial cells, possibly because of cordycepin and adenosine.  Animal studies suggest the observed effects on respiration are caused by enhanced oxygen utilization capacity, supporting the traditional use of cordyceps in Tibet and Nepal to offset altitude sickness.

Scientists at the University of Nottingham in Britain have been researching the potential of Cordyceps to reduce inflammation. While their research shows the fungus is effective at reducing inflammation at the cellular level

Ancient Traditional Use of Cordyceps.

Cordyceps is one of the most rare and expensive herbs in Chinese tonic herbalism. It is primarily collected wild in the high mountainous regions of Tibet, and on the high peaks of Yunnan, Sichuan, and Gansu Provinces of China. It can also be grown in a semi-wild manner, but this Cordyceps will be of lower quality (it is still very good).

A rule of thumb—low cost Cordyceps is not wild. The wild Cordyceps will always be the most expensive. High grade Cordyceps is light brown in color and neat. The caterpillar should have eight pairs of legs, the four middle ones being predominant.

The mushroom, or stroma, should be slightly longer than the larva’s body and will be slightly twisted. In good quality Cordyceps, most of this stroma will be intact. Cordyceps possesses a rich and not unpleasant flavour.

Cordyceps grows in Tibet, and in Yunnan and Sichuan Provinces of China. Tibetan and Bhutanese Cordyceps are considered to be the best. It is highly sought after and is more expensive than that from other sources. Wild Cordyceps from Tibetis the best Cordyceps in the world. The very best Cordyceps, the kind the emperor would want, is called “King Cordyceps.” It is graded according to size, the larger the better. Large ones command a hefty price.

The Cordyceps most commonly found in Chinese herb stores is cultivated. It comes in neat packages but wild Cordyceps from Sichuan and Yunnan are readily available if you ask for it. Tibetan and Bhutanese cordyceps however are rare, precious and more effective. 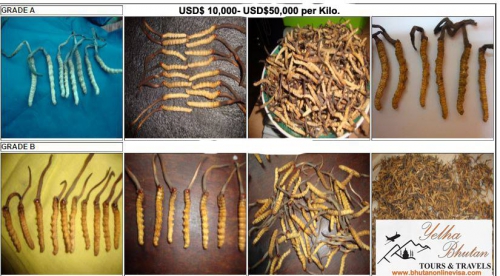 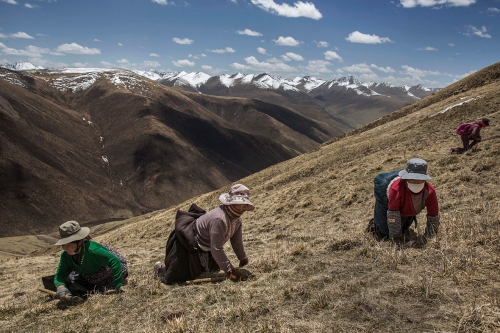 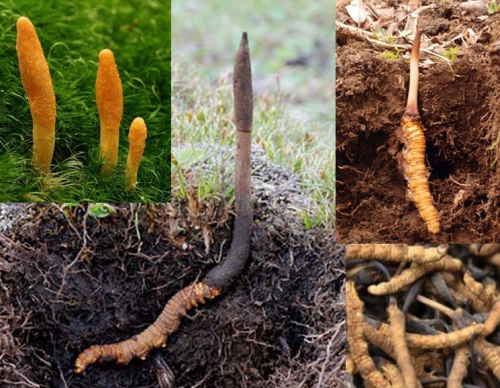 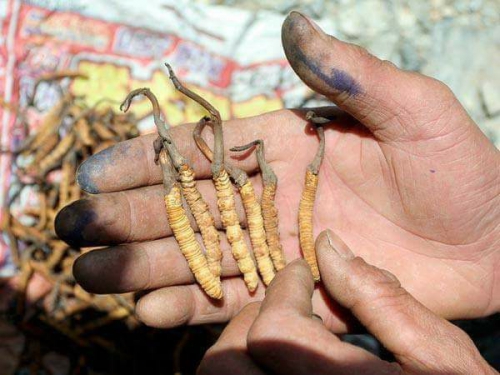 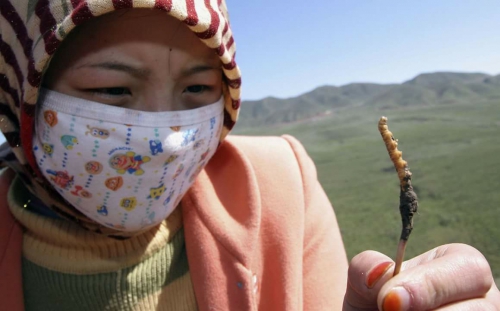 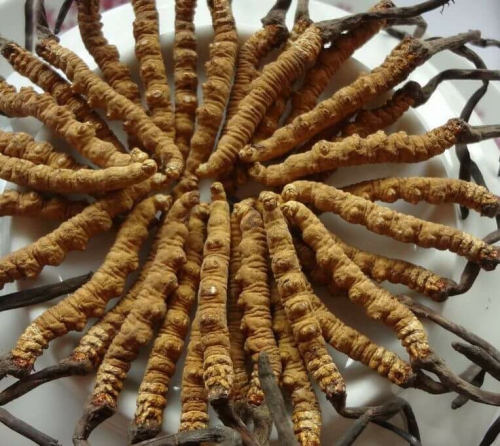 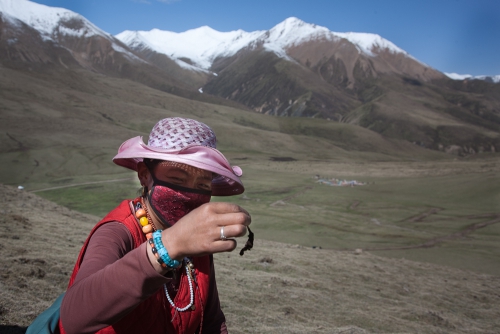 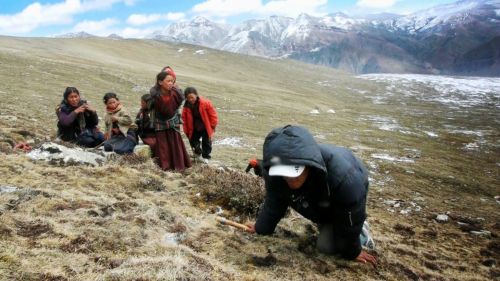 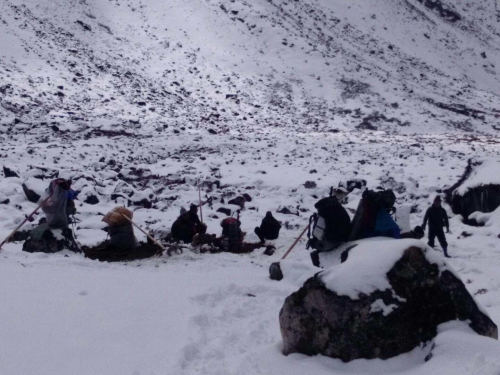 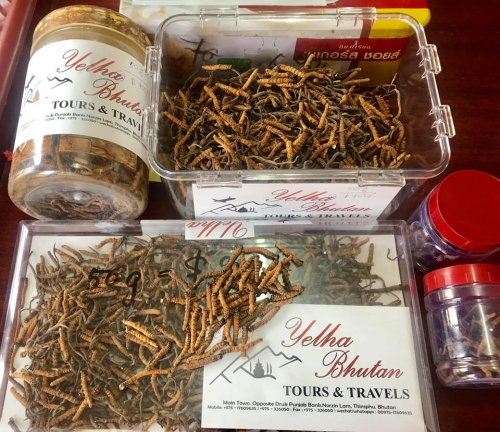